To whom it may concern:

If you saw me in the back of a police car, what would you think I was arrested for?

Answer me, then post this in your own journal to see how many different crimes you get accused of committing.

Up late trying to find a new lubricant that doesn't pick up regolith and grind it into the moving parts of the mechanical lazor. Also, trying to tune the mechanical lens to handle a larger concurrent mass of lava sharcks. At this rate, I'll never make it to the moon.

Well, the internet doesn't provide me a site to buy lunar regolith simulant, so I'm proceeding with testing using common sand. *sigh*. Hopefully I can make this work.

Working toward being a supervillian is really hard.

Can someone help me design a lens to focus a coherent stream of lava-sharks? I am trying to build a mechanical lazor as photons are too tiny and insignificant to work the way I want.

Also, does anyone know where I can get some lunar regolith simulant for testing?

Just a little side project I am working on.

I got my belated birthday present from my sister!

I'm going to the moon. 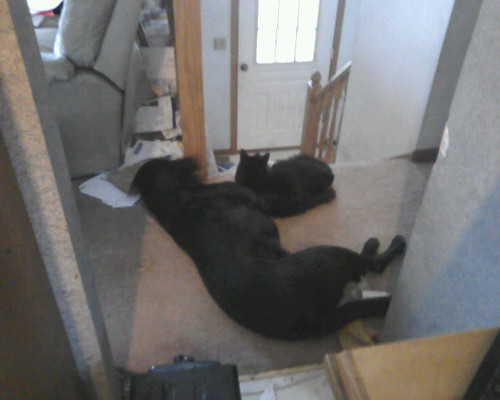 CATS AND DOGS LYING TOGETHER!

I got a new cell phone. The old one still works, but it wasn't a T-Mobile branded phone, so I couldn't send or receive images on it. The new phone does allow picture messages, and it's wifi enabled.

Coverage is pretty bad inside my house, especially in the basement where I live. However, wifi coverage is abundant there. I can use my internets at home as a phone, and it doesn't even count against my minutes.

I also can e-mail pictures I take to myself, and this post is just the result of playing with that feature. 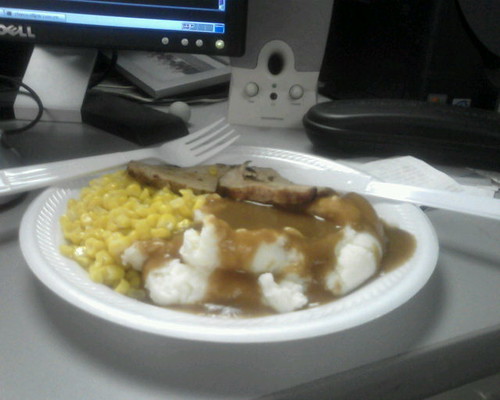 The cafe in the building I work at is doing a week-long trial serving food in the evening. The plate above cost a dollar.

What did I do?

Broke my ThinkPad R40 by falling on it.
Fixed the front bumper on my Jeep
Bought a refurb ThinkPad T43
Deleted my MySpace
Caught a cold
Posted this update on LJ

Doing laundry today, I sorted it out, and did a load of whites. Threw them in the dryer, loaded in the blacks and found one white sock.

So I have one dirty white sock.

Then the black load was done, loading in colors, found one black sock.

Laundry has weighed me in the balance and found me wanting.
Collapse